Traveling in an RV with no reservations gives us the freedom to leave a place early if we aren’t enamored with our surroundings, or extend our stay if we have more to see. In some locations, no reservations can mean no place to stay. Such was the case around Austin TX. After several phone calls, we lucked out procuring a concrete slab spot at Longhorn RV Resort in Niederwald TX, a tiny town south of Austin, for a few nights starting Sunday, February 12, 2017.

The advertised Wi-Fi access at most campgrounds rarely provides enough juice to download our email. Longhorn’s good-for-email-only Wi-Fi could not even deliver that. Tengointernet to the rescue. My photos backed up quicker than I could process them on the laptop with high-speed access to the internet that matched our home service. I’ll gladly pay an extra fee for service that is that fast.

Apparently, breakfast tacos and burritos are a big deal in Texas. I often make tacos for lunch out of our dinner leftovers, but I had never thought to stuff a tortilla with eggs and such. On Monday, a good review from the resort staff, lead us to H & Aleyn’s for their two breakfast tacos for $2 special. While we waited for our order, I grew skeptical when the waitress brought out our decaf coffee. The scant contents of the Folgers jar she set on the table next to the two mugs of steaming water had clumped together at the bottom. Jon had to do the shake, shake, shake it dance to break up the crystals of freeze-dried coffee. After my first sip of the instant brew, my skepticism disappeared. It wasn’t as good as our freshly ground beans coffee, but it wasn’t bad. And the breakfast tacos? The house made tortillas wrapped around a mixture of fluffy eggs, potatoes, chorizo, onions, and bell pepper were the perfect start for a long day of sightseeing.

Our destination for the day was the LBJ National and State Parks to see LBJ’s birth home, where he grew up with his family, and the ranch where he and Lady Bird made their life together. The parks are located in two different areas. The Lyndon Johnson boyhood home is located in Johnson City TX, about 14 miles east of the ranch, also known as the Texas White House, near Stonewall TX.

We started out with a tour of the boyhood home in Johnson City, a town founded by his uncle, James Polk Johnson. Lyndon moved here with his family at age five. The left side of the house includes a porch where Lyndon’s mother, Rebekah Baines Johnson, taught her five children the finer points of debate, oratory, and public service.

One might say this was a house divided. Rebekah not only taught her children on the porch on the left side of the house, she also entertained her friends there and in the parlor. The bedroom for the three girls also occupied that side of the house. The men took over the right side of the house where Sam Ealy Johnson, Jr., Lyndon’s father, a state representative for 12 years, met with his constituents and fellow businessmen. The house is quite small for a family of seven by today’s standards.

Parlor of the Johnson House 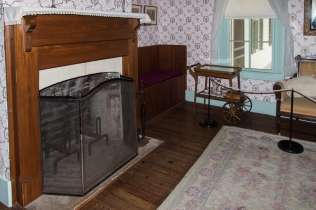 Parlor of the Johnson Home 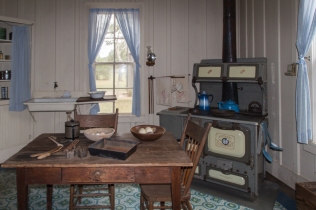 The tour of the ranch was the highlight. The house appeared small as we walked up to the gate where the tour began. Lyndon’s office, added to the original structure in 1958, is the single story portion on the left side of the photo. The contents displayed in the office are items that Johnson used throughout his lifetime and includes his desk and chair, three televisions, phones, typewriter, teletype, and other artifacts. Lyndon Johnson’s attitude is summed up on an embroidered pillow with the saying, “This is my ranch and I do as I damn please.” The pillow sits on a leather chair with the presidential seal on the headrest.

The park service does not allow photography inside the house. The furnishings are of the 1960s and nothing fancy, but homey and comfortable. What we found of interest were the three television sets in LBJ’s office, living room, dining room, and bedroom and also numerous phones throughout the house. The bedroom also included bright lighting to allow him to read late at night.

By the time we finished the tour, our breakfast tacos had worn off and our stomachs needed filling. We decided the 15-mile drive into Fredericksburg wasn’t too far to travel for an early dinner. Otto’s German Bistro, a quaint restaurant with a menu that changes each week, turned out to be a perfect pick for a meal. We gazed out from our window seats at the National Museum of the Pacific War and wondered why in the world there was a museum about the Pacific War in Fredericksburg TX. Too bad it had closed by the time we finished our dinner. As we drove through town to get a flavor of the place, I wished we could stay awhile and explore this historic town in the hill country. Maybe some day.

Loop drives always seem like a good idea to me because we get to see more. Our GPS pointed out a route that seemed more straightforward than having to retrace the one that brought us to Fredericksburg. What an adventure we had as we raced the sunset to return home on farm-to-market roads through the hills. As dusk turned to dark, our confidence in the route guided by the GPS waned as it directed us to turn right here. Turn left there, and continue along this road as if in a circle. Obviously, we made it even though thoughts of driving all night on farm roads whirled in my head.

We rounded out our stay near Austin TX with a visit to the Lyndon Baines Johnson Library and Museum and a quick tour of the Texas State Capitol. We had never visited a presidential library before. After visiting this one, we are adding them to our list of places to see on future trips.

I was still attending grade school when Johnson took office after John F. Kennedy’s assassination and never understood the impact he had on America through his vision of a Great Society. We have Johnson to thank—or curse depending on your political bent—for Medicare, PBS, college financial aid, the Voting Rights Act, Civil Rights Act, and even seat belts in our cars. 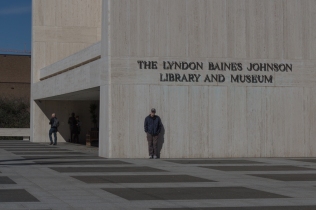 JT Gets the Treatment from Lyndon

The archives are a historian’s treasure trove of documents, photographs, recordings, and moving image records.

We caught one of the last docent-led tours of the day at The Texas State Capitol, a National Historic Landmark. The docent provided information on the history of the building and pointed out tidbits about the paintings, symbols, and renovations. Originally built in 1888, the Italian Renaissance Revival style building underwent a major restoration and expansion beginning in 1990.

Austin has to go back on our future travel list. After 5 days, we barely dipped our toes in all that Austin has to offer visitors. Time to move on to our new location. The National Museum of the Pacific War called out for us to solve the mystery regarding its placement in Texas. Fredericksburg, here we come.