Sunny and warm weather, with only a hint of a breeze, welcomed us to Quiet Creek RV in Fredericksburg on February 16, 2017. National Museum of the Pacific War, here we come.

The museum, composed of 55,000 square feet with 33,000 square foot occupied by the George H. W. Bush Gallery, chronicles the Pacific War from the “seeds of conflict to the signing of the Japanese surrender in Tokyo Bay.” Artifacts include one of the five Japanese midget subs used at Pearl Harbor, a B-25 bomber, Japanese Float Plane, Admiral’s Barge, and Atomic bomb casing. The sub display transported us to Pearl Harbor. As old war footage flashed on a wall, the darkness, sirens, and a streak of light across the floor simulating a torpedo made it all come alive.

The Smithsonian-like museum allows visitors to immerse themselves in each battle fought during the war with detailed descriptions of the ships involved, and personal stories of both men and women of various nationalities.

Outside, the conning tower of the USS Pintado submarine nestles within the landscape giving the impression of a submarine navigating the ocean waves. Other artifacts include a torpedo tube and anti-aircraft guns.

Wall plaques and bricks memorialize those who fought during the war in the Veterans’ Walk of Honor and Memorial Wall next to the building.

The Japanese Garden of Peace—gifted to the museum by the Japanese government in May 1976 to commemorate the 130th anniversary of the founding of Fredericksburg—provides a tranquil respite to shake off any emotions that may overcome visitors to the museum, the Walk of Honor, and Memorial Wall.

Visitors follow Admiral Chester W. Nimitz’s life and career at the Admiral Nimitz Museum, housed in the Nimitz Hotel, established in 1860 by his great-grandfather, and later owned by his grandfather. The San Francisco Bay Area also honored Admiral Nimitz by naming Interstate 880 after the man who retired there and lived on Yerba Buena Island. I have to say, that the museum is a far better tribute to the man. 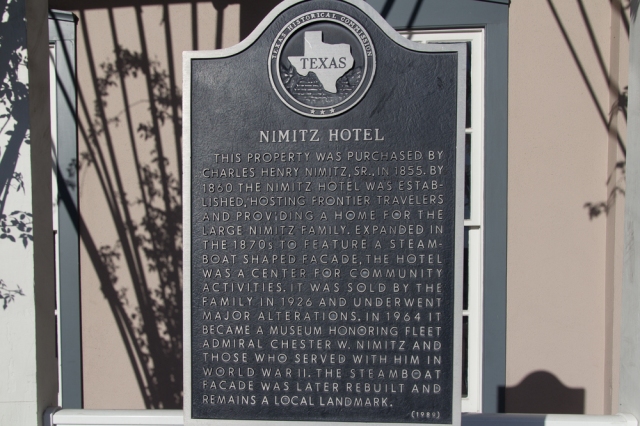 Within in walking distance, re-enactments, also known as living history exhibits, are staged throughout the year at The Pacific Combat Zone, a re-creation of a Pacific island battlefield. We watched behind a fence for a few minutes as reenactors trained for their upcoming presentation for spectators who watch from the safety of the stands under the curved metal roof.

So why is the Pacific War Museum located in Fredericksburg? Local residents established the Admiral Nimitz Foundation to honor Fredericksburg’s native son, commander-in-chief of Allied Forces in the Pacific Ocean area. When approached, Admiral Chester W. Nimitz insisted that the organization honor all the men and women who served, not just him. The foundation heeded his request and developed an excellent museum and research center to honor all those affected by the war.

It is a good thing that tickets provide admission for two days because there is so much to see. One day is not enough to soak up all the history at the museum.

Saturday, our last full day, seemed like a good time to enjoy nature and a hike at the Enchanted Rock State Natural Area. We got up early, packed a lunch, and set out intent on beating the rush and snag a parking spot. The warning light near town flashed that the park had already closed. Oh, well, maybe we’ll get lucky. As we approached the entrance to the park, several cars waited to enter on the opposite side of the road. Maybe the line isn’t too long. We drove on passing cars, vans, SUVs, and trucks for a quarter mile, half a mile, a mile, on and on for at least two miles or more. Vehicles crowded close to the shoulder to avoid blocking the road when they could, and others crossed the double yellow line and headed toward us in our lane when the road narrowed. We made a U-turn and headed back to town, settling on a little urban hiking instead. We’ll schedule our visit to Enchanted Rock during a weekday if we travel through here again. I managed to capture this photo as we drove by.

We would have rather eaten our lunch at the Enchanted Rock, but a shaded picnic table at the visitors’ center turned out to be a great place to people watch as they jockeyed for parking spots. At the visitors’ center, we watched a movie about the history of Fredericksburg. Then we walked up and down the historic district of W. Main Street, stopped in at The Christmas Store to buy an ornament to remember our trip, and toured the Pioneer Museum.

Blooms and buds gave signs that spring would soon arrive.

There is much more to explore in Fredericksburg, and I’m sure we’ll be back this way again to stay longer. For now, we had to move on.