We hopped on Interstate 10 toward Las Cruces NM on Monday, January 23, 2017. With strong winds forecasted for the night and into the next day, we checked in at the KOA for two nights until we could safely travel. Braving the cold wind the next day, we ventured out to see Fort Selden Monument only to find a “Closed on Monday and Tuesday” sign on the gate. That will teach me to look up places online to check hours of operation.

Ace navigator here, I plotted a route to Peppers New Mexican Cafe & Bar on the Mesilla Plaza for lunch. Somehow the roads did not match the little map I held in my hand so we wound up driving in circles, in and out of historic neighborhoods, up one street, and down another before finally arriving at the plaza. The host at Peppers sat us in the colorful courtyard near the water fountain, giant palms, and ferns.

There are rumors the building is haunted and looking around the place it is easy to see why with the gold framed historic photos, mirrors, low lighting, lace, and red velvet curtains. 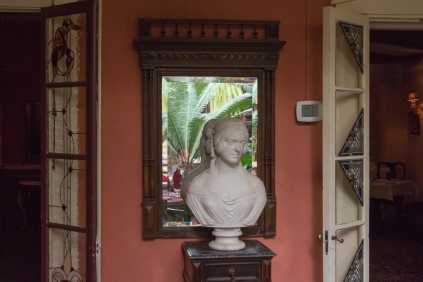 After our meal at Peppers, I wanted to walk around Mesilla Plaza to take more pictures, but one shot of the Basilica of San Albino and we ran for the truck to get out of the cold wind. Boy, we sure are a couple of wusses.

The next morning, Wednesday, January 25,  we left for Alpine anxious to stay at the Lost Alaskan RV Park. We had wanted to stay there last year, but they were all booked up for the Cowboy Poetry event. On our way to Alpine, we stopped at the Prada store that stands alongside US 90 about 1.5 miles for the town of Valentine.

Why is a Prada store sitting out there in what seems like the middle of nowhere? It’s not a working store but a sculpture built in 2005 by artists Elmgreen and Dragset. The Department of Transportation designated the installation as a museum in 2014 after a Texas artist vandalized the building. I’m glad it stands as a curiosity on the highway. it would be a shame if it were destroyed or allowed to decay.

Last year I saw love locks attached to a fence behind the building and I was curious to see if they were still there. There weren’t as many as those seen in Lovelock NV behind the courthouse, but it looked like there were more than last year.

A few miles down the road, we saw a white blob off in the distance. What was that big Snoopy looking balloon? Was it tethered to the ground? The wind was pretty fierce so it couldn’t fly. Finding a spot to park on the side of the road while pulling a thirty-foot trailer isn’t an easy task but eventually, we found a spot so I could zoom in to get a closer shot with my camera.

It turns out the object was a tethered aerostat radar system. Having passed through a number of federal agencies over the years, the U.S. Customs and Border Protection assumed responsibility for its funding in 2014. The balloon provides low-level radar surveillance along the southwest border between Mexico and the United States.

The lady who checked us in at The Lost Alaskan RV park warned us about freezing temperatures overnight. We followed the instructions she gave us, but our water hose still froze along with our filter. Lesson learned: Make sure to remove all water from the filter and hose during an overnight freeze. Turning the water off is not sufficient. Duh!

Our son-in-law raved about Marfa TX and encouraged us to stop there. We couldn’t see what was so special when we drove through on our way to Alpine so we decided to give it a closer look the next day. On our way there, we stopped at the Marfa Lights Viewing area. Apparently, people have seen the lights since the 1880s and for years UFOs, ghosts, and other unexplained phenomena were thought to be the cause. Recent scientific research debunked those ideas and attributed the lights to atmospheric reflections of car headlights and campfires. The family of the first man to write about the lights during the 1880s donated the funds to build the viewing area. Around the property are brick kiosks with plaques that tell of the history of Marfa and the surrounding region, making this site an interesting educational stop during the day.

Like most states, Texas offers plenty of plaques along the roadsides, which provide information on historical events that have occurred at that spot or nearby. We stopped at one that described the Paisano Pass, which emigrants used on their way to California. What we couldn’t figure out was why someone had cemented into the ground a ladder over the barbed wire fence. There was no evidence a trail existed there, but perhaps we didn’t look good enough. I wasn’t about to climb over and scout around.

Once we hit Marfa city limits, Jon slowed the truck and I scouted down each street until we found the one leading to the Presidio County Court House. Churches, hotels, motels, and businesses, including an NPR station, housed in historic buildings, also lined the roads. Art galleries and studios are scattered around Marfa and the town is home to a four-day Marfa Myths Music, Film and Art Fest held in March. I love that counties have preserved the historical character of their courthouses.

A sampling of churches clustered near the courthouse in Marfa TX. 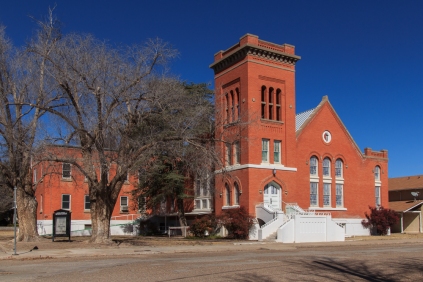 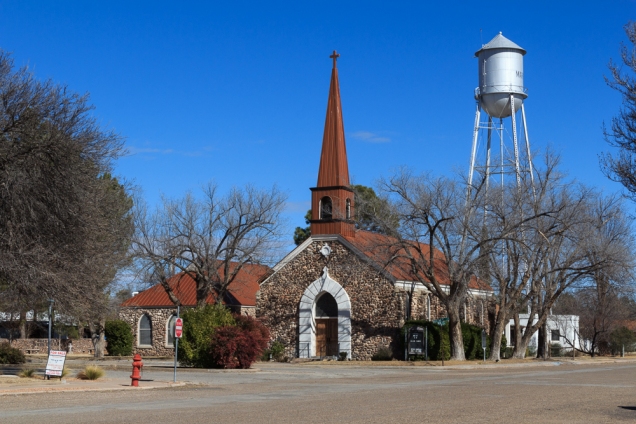 The Hotel Paisano, built in 1930, was used by Warner Brothers during the filming of the movie Giant starring James Dean. The hotel includes a large gift shop where tourists won’t have trouble finding the perfect gift for friends and family. 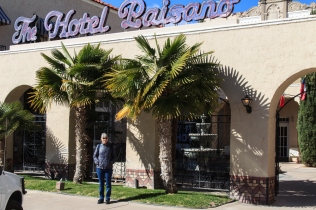 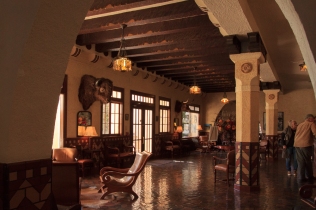 A few of the buildings in Marfa TX.

We stopped in at Capri for a lunch of the best butternut squash soup we’ve ever tasted served with housemade hearty slices of bread. The restaurant offers many seating options, choose inside in the bar, in the garden, or on the patio.

The Capri in Marfa TX

Patio Seating at The Capri

Garden at The Capri

Inside Dining at The Capri

Bar at the Capri

Additional Seating at The Capri

Our short visit showed us why our son-in-law promotes Marfa with excitement. It is definitely a unique little town with a lot to offer the visitor. Fortunately, another trip is needed to take in the Chinati Foundation and the art galleries. More items to add to our must see list.

Back in Alpine, we walked down West Holland Ave. The Kiowa Gallery has a wide range of photos, paintings, jewelry, clothing, and other art objects for sale.

Looks like the occupants of this Tiny House have everything they need to live off the grid. The vehicle sported Alaska license plates. Were they visiting the Lost Alaskan?

We could have stayed several more days but rainy weather was forecast so back on the road. Next stop, San Antonio after a night in Del Rio.

2 thoughts on “Las Cruces and Mesilla NM, and Alpine and Marfa TX”