We plotted a route home and left the Grand Tetons on August 12, stopping for lunch at the Heart & Soul Bakery in Pinedale WY. Pinedale is a place I’d like to spend some time in the future. They offer an abundance of recreational activities in the winter and summer months, from swooshing down hills on skis and riding snowmobiles to hiking, fishing, horseback riding, and hunting. You can even hop on the free wagon shuttle to get around town. 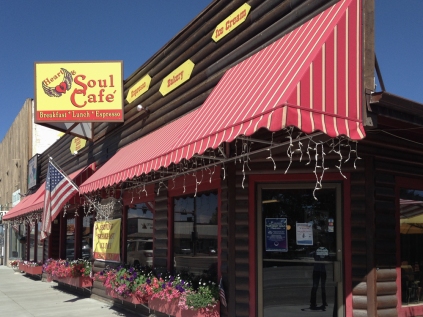 The Rock Springs/Green River KOA in Rock Springs WY,  just north of Flaming Gorge National Recreational Area provided a nice spot for the night. After setting up camp and eating dinner, we took Highway 530 on the west side of the gorge to an overlook and then a marina. In the distance, beyond sagebrush-covered hills, stood tops of buttes banded with red, orange, yellow, and white. A few miles later, a small herd of pronghorn antelope was feeding a few yards off the road.

The Flaming Gorge Reservoir area is a great place if you have a four-wheel drive vehicle and/or a boat. Having neither we couldn’t get close enough to see the canyon walls and the water below. The next morning we packed up and took the east road, Highway 191, crossed over the reservoir bridge and made our way to Dinosaur National Monument. 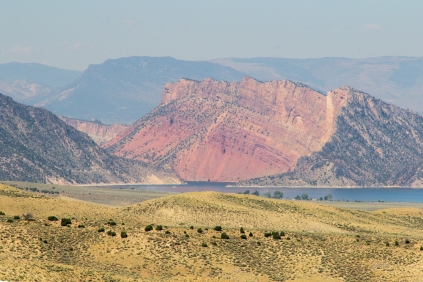 We arrived early enough to snag a spot along the river in the Green River Campground and take the tram up to the dinosaur bones and see other sights in the area.

There we are in the trees.

When I read they displayed dinosaur bones, I imagined boredom setting in while we wandered around a building housing glass-covered tables filled with bones. Instead, the two-story building protects a preserved dig site from weather and erosion. The bones are still encased in the sandstone mountain.

Outside View of Building

Next, we took the driving tour around the park. First stop, Swelter Shelter where a short walk later we viewed petroglyphs. I can see why some people would believe in ETs after seeing the carved designs in the sandstone. The images do look otherworldly.

Hills across from Split Mountain Campground show how the earth has lifted revealing the different layers of sediment.

Erosion from wind and rain on the sandstone created Turtle Rock and Elephant Toes Butte. The tour pamphlet did not mention the three mounds in front of Turtle Rock, so I named them The Three Crabs.

Our final stop on the tour was the Josie Morris Cabin. Josie arrived in the area in 1914 and built several cabins on her homestead. The cabin shown in the pictures was built in 1935. She tried married life five times but eventually chose to live alone and work her land by raising and butchering cattle, pigs, chickens, and geese. Until her death in 1965, she lived without electricity and burned wood for heat inside her cabin. The box canyon in the photos is where she corralled her livestock. I admire Josie for her bravery and toughness to eke out a living on her own terms in such a hostile environment.

The next morning we took US Route 40 out of Vernal UT, the gateway to Dinosaur National Monument. In Vernal, they decorate their streets by lining them with baskets and planters brimming with purple and white petunias. The petunias distract from the billboards and signs advertising the businesses.

We then turned southwest on US Route 91, west on US Route 6 and south on Interstate 15 to the Big Mountain Campground just a few miles east of Nephi and south of Provo. This campground was my favorite of all the places we stayed. The huge trees provided shade, and the green grass and sprinklers cooled the air. They rent cabins and offer tent spots in addition to the full hookup sites for RVs. It looked like a perfect place for a writing retreat, family reunion, or just a respite from traveling. I would have liked to stay there more than one night, but we had to get back on the road.

US Route 6 took us through Utah and Nevada, connecting with US Route 395 in California after an overnight stay in Tonopah NV. Jon and I did a double take when we saw a Tesla charging station in the middle of this old mining town. Unfortunately, we couldn’t stop to get a picture.

We decided to stay a few days in June Lake, one of our old stomping grounds from when we took our kids on vacation. Jon finally got an opportunity to wet a line after renting a boat at Gull Lake Marina. Although both of our mouths watered for fresh trout, Jon wasn’t able to catch our dinner. We opted for dinner out that night at the Sierra Inn Restaurant. 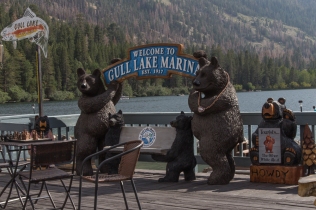 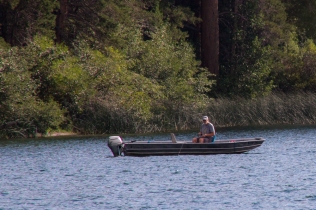 On August 19, we pulled up in front of our house with visions of a luxuriously long hot shower and a good night’s sleep in our king size bed.

In case you are interested, here are the stats from our Yellowstone Summer 2016 trip:

10 thoughts on “The Trail Home”