Wanting to avoid the wildlife-sighting traffic jams in Yellowstone Park, we left early in the morning on August 9 heading west on Highway 14 through Yellowstone Park and then south on Highway 191 into Grand Teton National Park. Few drivers were on the road, and it reminded me of how calm and peaceful most of our trip had been so far. Jon and I often commented on the friendly and polite people we had met so far on this trip, even the drivers. Navigating the traffic in the San Francisco Bay Area can be a challenge with millions of people rushing to work or school or to shop. We were able to relax more since we weren’t on constant alert to avoid pushy or inattentive drivers.

I enjoyed the scenery of trees, sagebrush, and mountain peaks as we rolled along the road until a car passed our rig and barely made it back in the lane before causing a head-on collision. I gripped the door’s grab handle and scanned the traffic for possible danger. Then we approached a four-way intersection crowded with cars stopped and waiting to make their moves. No stop sign, we had the right of way. A car pulled out from the right side and turned left in front of us. A Mercedes jetted out from the same direction, turned right, then reduced speed. We were not slowing or stopping. “Watch out.” Red lights illuminated the rear of the Mercedes. “Stop!” Brakes slammed, tires squealed, a horn blared, burnt rubber lingered in the air, my heart pounded, and hands shook. The Mercedes finally got the message and took off. Whew! We survived without any damage. With caution, we continued on our route to the Gros Ventre campground. 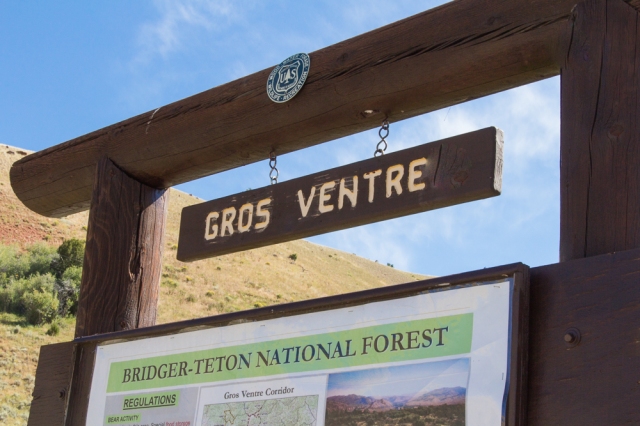 I finally calmed down from the near miss when we arrived at our campsite and took in the view from the back of our trailer and camp spot. Washing dishes will be a pleasure with that scene in my picture window.

We set up camp and drove into town for a leisurely walk along the streets of Jackson, wandering in and out of stores and finding one-of-a-kind souvenirs. What we found was the hustle and bustle the likes you’d see in New York City. People crowded the sidewalks, drivers ignored speed limits and honked their horns and not a parking spot in sight. A car zoomed past us almost sideswiping our truck. My knuckles turned white. The grocery store was no different. The impatience we saw on the road spilled over into the grocery aisles with shoppers using their carts as battering rams. I thought for sure I’d be run over while deciding which product to buy. Somehow, we managed to make it back to our peaceful campsite surrounded by trees and grass and sage with lots of elbow room and space.

We braved the chaos the next day to take in the majestic towers of granite that are The Grand Tetons. The peaks rise out of the Snake River Basin reaching heights of 13,775 feet. What is unique about these mountains is the lack of foothills surrounding their base. Throughout our stay, it seemed like they were always there, whether front and center or in the background, rising up from the earth in all their splendor.

We first explored the Bridger-Teton Gros Ventre Slide Geological Area where a slide occurred on the 9,000 foot Sheep Mountain and deposited debris in the valley. It is remarkable that evidence of the destruction is still evident 90 years later. 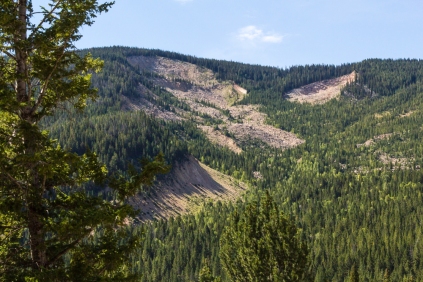 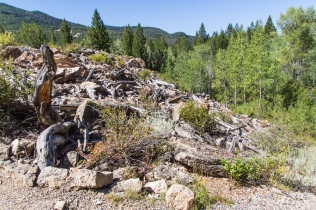 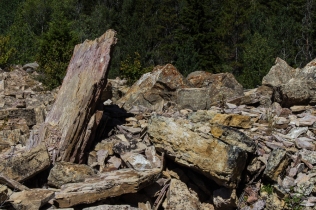 I love the contrast of the red iron oxide hillsides with the green trees and blue sky. 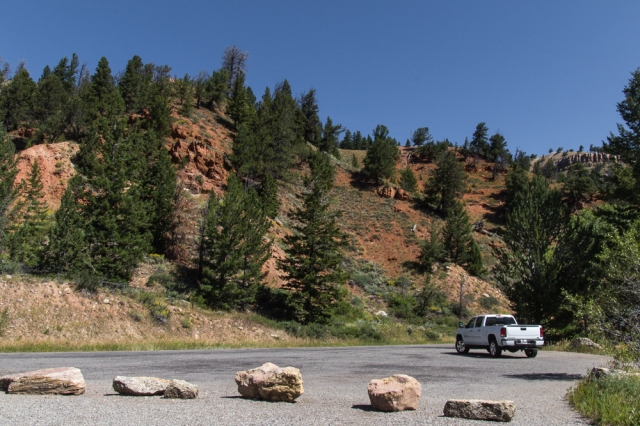 Our next stop was Mormon Row, which was a community of homesteads settled by the LDS church during the late 1800s and early 1900s. Several buildings and a barn have been preserved and improved. It took hearty folk to settle in this valley where the growing season lasts only two months out of the year. 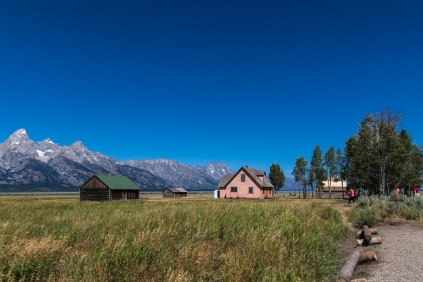 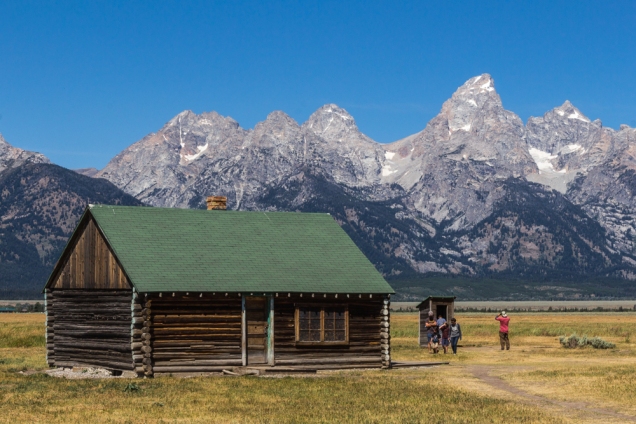 At the Craig Thomas Discovery and Visitor Center, we learned of a ranger talk at Menor’s Ferry Historic District. The ranger told the story about William Menor who operated the general store on the west side of the river and Holiday Menor, William’s brother, who operated a lime pit on the east side of the river. William rigged a system to transport local residents and travelers across the Snake River. The replica ferry is large enough to hold a wagon and a four-horse team. 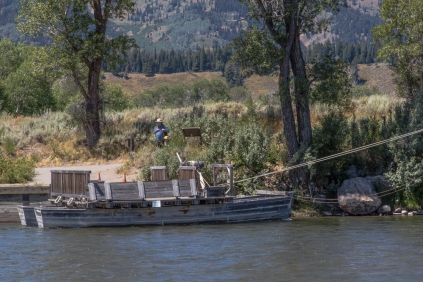 General Store Across the River 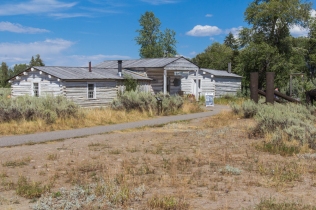 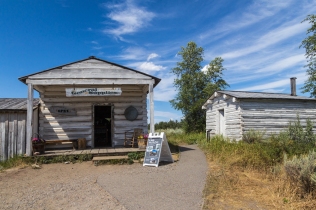 William sold out to Maude Noble who added a cabin and barn to the Menor homestead. The cabin was the meeting site in July 1923, where Horace Albright, Yellowstone National Park superintendent, met with local ranchers and businessmen to discuss the process of creating Grand Teton National Park. 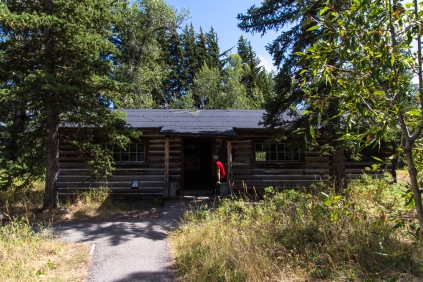 From Inside Noble Cabin

From Barn Toward Noble Cabin

The red Robert Miller wagon is one of three that entered Jackson Hole in 1885. The yellow wagon is from the JY Dude Ranch opened in 1906 by Louis Joy. John D. Rockefeller purchased the ranch as part of a 35,000-acre acquisition. The Rockefellers used the ranch as their private summer retreat for nearly 70 years then donated the property to the park service. He also donated the funds to return the ranch to its natural habitat, and convert it into the Laurance S. Rockefeller Preserve Center.

Nobel Barn Includes Relics from the Past

Nearby was the Chapel of Transfiguration where visitors enter to pray and meditate under the watchful eye of the Tetons. Even children who entered the chapel quieted their voices and walked softly on the wood floors. 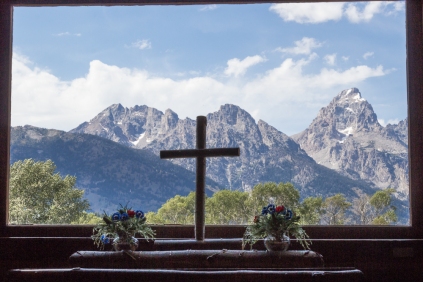 View From Inside Chapel

The next morning as we left to sightsee, we came across a group of female moose (cows) eating their breakfast in the campground. 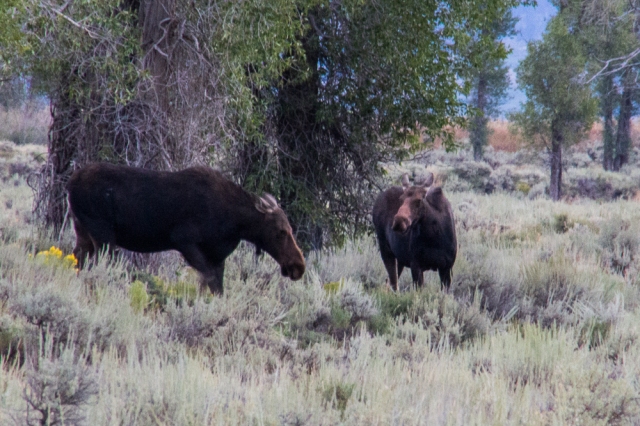 We took a tour of the Miller House, which was the first property purchased to create the National Elk Refuge established in 1912. The elk (7,500 on average) return to the refuge each winter and leave for the high country in April and May. 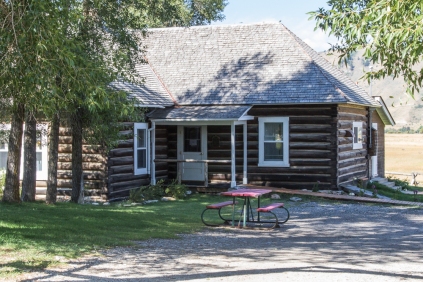 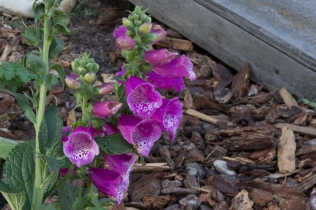 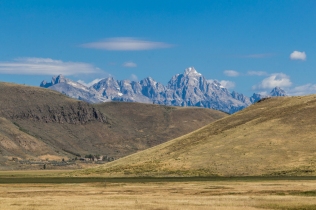 Parking was limited at the Laurance S. Rockefeller Preserve, but the 15-minute wait was worth it to hike to Phelps Lake. As I walked along the 2 ½ mile loop trail, through the towering trees, over hills, beside creeks, across a road, and on to Phelps Lake, I thanked LSR for conserving this paradise so all that visit can experience the power that nature can exert on one’s soul. 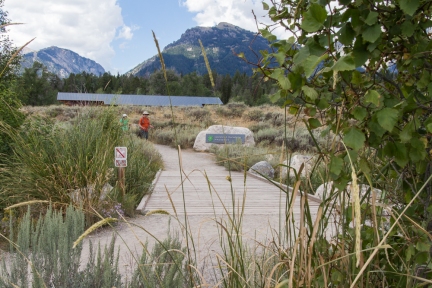 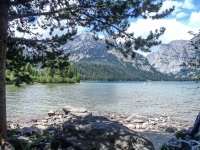 The architecture of the ranger station and restrooms at the preserve was so different from what I’ve seen in any of the national parks. Instead of the typical log buildings or forest-green siding, the modern mid-century look with clean lines, angles, and reflective surfaces welcome the observer. 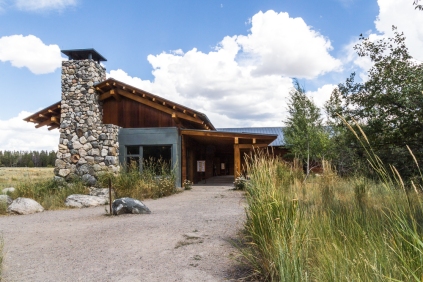 Back of LSR Visitor Center

We could have stayed for another three or four days and seen the whole park, but we decided to explore the northern part on a future trip. Before leaving the area we ventured into town early in the morning for a hot breakfast and friendly service at The Bunnery. Then as we packed up to leave for our next destination, a mother deer and its fawn grazed on the grass a few yards from our campsite, a memory of our stay at Grand Teton National Park for us to tuck away. 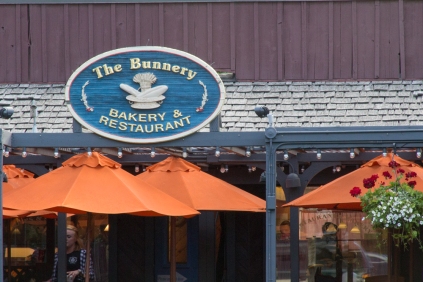 The Bunnery in Jackson WY