I wasn’t sure what to expect from the Crazy Horse Memorial. A woman had told us it was more of a tourist trap. “Why pay for something you can see from the road?” she said. “That family is ripping people off.” It’s true, you can see the memorial from the road, but I had no idea why the family raised the hackles on the back of her neck. 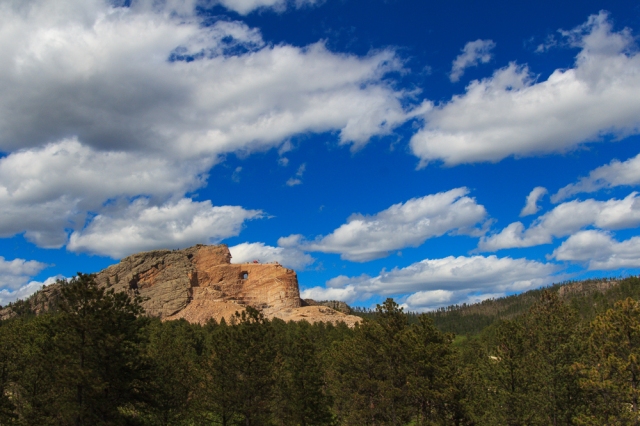 Everyone else told us we had to see it. So, we paid the price of admission, $22 for both of us and only $28.00 for a car with more than two people. Those prices seemed reasonable to me.

Had we only viewed the sculpture from the road, we would have missed learning about the man behind the sculpture, how the memorial came about, and of course the American Indian artifacts and the arts and crafts in the Indian Museum of North America. And I would never have been able to zoom in close enough to capture a view of the work on the mountain.

At 87 feet and 6 inches, Crazy Horse’s face dwarfs the construction equipment and crew. Between and below the red and yellow pieces of equipment, there is a dark speck. This is the spot where two men stand on one of the slanted ledges. Zooming in further, one of the men appears to be working with what looks like a jack hammer. Looks like a dangerous task to me.

The amount of work that has and will go into this creation, astounds me. From the infrastructure consisting of roads to allow access for heavy equipment to the safety measures required for handling explosives and working on the side of the mountain, it seems an impossible feat. All of this activity gave me a glimpse into the complexities of the making of Mount Rushmore.

In 1939, Henry Standing Bear, an Oglala Lakota chief, commissioned Korczak Ziolkowski to sculpt a memorial that would honor Crazy Horse, an iconic Native American who fought against the U.S. military in the Battle of Little Bighorn in June 1876.

Korczak Ziolkowski began working on the project in 1947 with the first blast on June 3, 1948. In 1950, he married Ruth Ross who came to the Black Hills to work on the memorial in 1948 with a group of young volunteers. Korczak and Ruth had five girls and five boys.

What attracted the twenty-two-year-old woman from Connecticut to the Black Hills of South Dakota when the area lacked basic infrastructures? Why would she leave the comfort of her home for the wilds of the west? According to Wikipedia, Ruth first met Ziolkowski when she was thirteen. Had Ruth harbored a love for Korczak for nine years? Or did their love grow after her arrival?

When Korczak died in 1982, Ruth and her children took over the construction and many of the family members still work on the project keeping Korczak’s dream alive. The family completed Crazy Horse’s face in 1998 and work continues today.

Except for the gift shop, which is operated by a private company, the memorial, visitor complex, and all activities are conducted under Crazy Horse Memorial Foundation, a 501(c) 3 nonprofit organization. The organization files an IRS Form 990 and is audited annually. No federal or state funds are used to finance the construction of the monument. The cost of construction comes mainly from contributions and admission receipts.

Admission includes a return trip at night to view the laser show. For an additional fee of $4.00, visitors can take a bus tour to the base of the mountain. Or, become a Crazy Horse Story Teller for $125.00 and travel to the construction site to see the work in progress. We opted out of the bus tour and visit to the construction site. We found plenty to look at in the visitor complex which includes the sculptor’s log home, studio, bronze showroom, and the artist’s workshop. Also, there is an orientation film and a 1/34 scale model of what the finished memorial will eventually look like if it is ever completed.

A certain amount of controversy surrounds the monument, although not discussed at the visitor center, or at least not that I saw. Of utmost concern is the amount of time the memorial has taken to construct. Since 1948, the warrior’s face is the only portion of the monument that the Ziolkowski family has completed thus far. Work is currently underway on the outstretched hand and the horse’s mane and there does not seem to be an end date for completion of the entire structure.

The second controversy is the way Ziolkowski depicted the outstretched hand in the model with a pointing finger. In his article, Mistake on the Mountain, David B. Conrad stipulates “the traditional American Indian . . . does not point with the solitary index finger.” He cites three sources as evidence that Oglala Sioux, the same tribe as Crazy Horse, would point using his thumb, not a forefinger. Perhaps Conrad’s article had the desired effect of inspiring individuals to contact the Ziolkowski family so they could make the necessary corrections.

Although Korczak Ziolkowski selected Crazy Horse as the model for the monument, photographs of the man do not exist so there is no way the memorial will represent his likeness. Ruth Ziolkowski emphasized the monument is a memorial to a race of people and not to just one man.

The fourth controversy is that descendants of Crazy Horse object to the use of their ancestor. They claim Chief Henry Standing Bear had no right to ask Ziolkowski to create the monument and feel that carving up the hills as a memorial is a desecration of their Indian culture.

After reading the stories of controversy, I understood why the woman I met might not have fond feelings toward the memorial or the family. But what about the “ripping off” comment? I dusted off my CPA hat and read the 2014 IRS Form 990. Yes, family members receive compensation for work they do for the organization. However, I did not see anyone receiving compensation that was out of line for the position they held within the organization or due to the size of the Foundation compared to non-profits of similar size. In addition, several outside directors determined compensation for the more highly compensated individuals. I was also pleased to see the organization receives regular audits of its financial statements.

We were glad we had visited the Crazy Horse Memorial. It is so much more than the carving on the mountain. The dedication of the family to see their father’s dream come alive was inspiring, the Native American arts and crafts were interesting, and the artifacts and historical significance were thought-provoking. I believe it is best at this point that the family continues their work. The partially carved up mountain would only be an eyesore in the beautiful Black Hills if they were to abandon Korczak’s dream. In the future, I’ll be watching the slow artistic progress as it unfolds on Thunderhead Mountain.