A visit with family and friends in Lake Havasu City AZ was the perfect place to kick-off our winter 2017 travel. With San Antonio TX selected as our ultimate destination, we only had to figure out which route to take and what we wanted to see on the way.

We selected Prospectors RV Resort as our home for four nights in Havasu. Prospectors offers paved streets, large graveled sites with room enough for off-road vehicles alongside the RVs, spotless bathrooms and all the amenities expected by the long-term winter visitor.

London Bridge is an icon in Havasu. The original bridge built in the 1830’s in London was dismantled and rebuilt in Havasu by Robert P. McCulloch as a tourist attraction for the town he founded in the mid-sixties. Today the city boasts a population of approximately 53,000. Havasu is a popular destination for RVers who live in colder climates (affectionately referred to as snowbirds), college students on spring break, and people who are passionate about watersports.

As happened during the start of our spring and summer 2016 trips, truck trouble slapped us in the face when the check engine light illuminated. Visions of our two weeks stuck in Elko NV last summer came into view. The dealer got us in on Monday morning, and in the time it took us to eat breakfast at Rusty’s they had replaced a bad sensor, which was covered under warranty. Good thing we were back on the road so soon because Prospectors was booked solid and we would have had to leave whether we had a truck or not.

On January 17, we headed south on I95 and made a quick stop at Bill Williams River National Wildlife Refuge. Behind me on the hill is the Hillcrest Bay Development, which has fantastic views of the refuge. 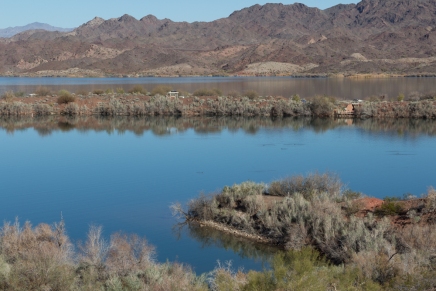 Organ Pipe Cactus National Monument was our planned stop for a few nights, but when we neared Gila Bend, we opted to stay the night at the Gila Bend KOA. We didn’t want to arrive too late at the monument’s campground since the spots are first-come-first-served. We had stayed at the KOA last year and were pleased to see that they continued with their improvements by putting in a pool, a patio behind the activity building, tent sites, and soon to arrive a new building to house restrooms and showers.

The next morning the campsites that greeted us at Organ Pipe Cactus National Monument Alpine Campground included wide long spots with plenty of natural habitat between them giving us the feeling that we were camping in the wild. An added bonus was that we had no neighbors beside us or across the road. 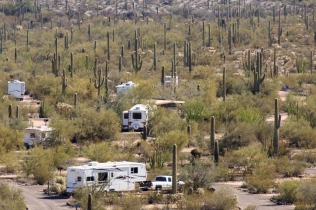 We ate lunch after our quick set up (no water, electrical or sewer hookups to worry about), and took the 1.3-mile trail to the visitors center where border patrol folks gave a talk on their responsibilities. The monument’s property extends to the border with Mexico and the visitor’s center is about five miles from the nearest crossing.

Besides the checkpoints on major highways, the border agents grade roads and paths that illegal immigrants and drug runners cross to identify locations where recent activity has occurred. They also use technology such as night vision, infrared, dogs, aircraft, and drones. It was interesting to learn that this border patrol region was responsible for the seizure of about 50% of all drugs seized in the United States and exceeds the illegal immigrants crossing the border.

Ever since Trump promised to “build a wall,” I’ve been worried about the 1,254-mile border between Mexico and Texas, which is defined by the Rio Grande River. Learning that border patrol will work with other departments to find the best solution should a wall be mandated gave me hope that the natural habitat and view along the Rio Grande border between Mexico and Texas may escape disastrous consequences.

Sprinkles woke us Thursday morning along with a little wind, but by 11:30 a.m. the sun was shining bright. We opted for the Desert View hike through Saguaros, Ocotillo, Palo Verde and other plants and cactus and shrubs. A cabana covered table was a great place to eat our tuna sandwiches after the hike before heading to the visitor center. 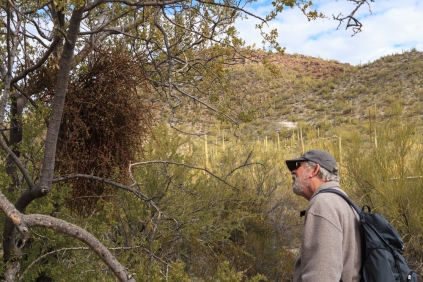 We arrived in time for a ranger talk on the leaf-cutting ants, Atta mexicana. It’s amazing that new colonies of the ants have increased over the years since only five of the 500 queens that fly out of the nest to mate manage to establish a colony. These ants form fungus, which is their fuel. They discard the leftovers outside of their nests, which provides nutrients to the neighboring plants in a symbiotic relationship.

Afterward, we drove the north Puerto Blanco Road where numerous saguaros grow. Like snowflakes and fingerprints, each saguaro has its own personality and no two are alike. Some grow arms out their tops some grow them low to the ground. Many sport baby arms that look like little fluffy balls next to their brothers and sisters outstretched arms.

Back at our campsite, the sky was ablaze. Smoke from a fire beyond the left side of the photo’s frame made it look like the setting sun was the center of the conflagration. 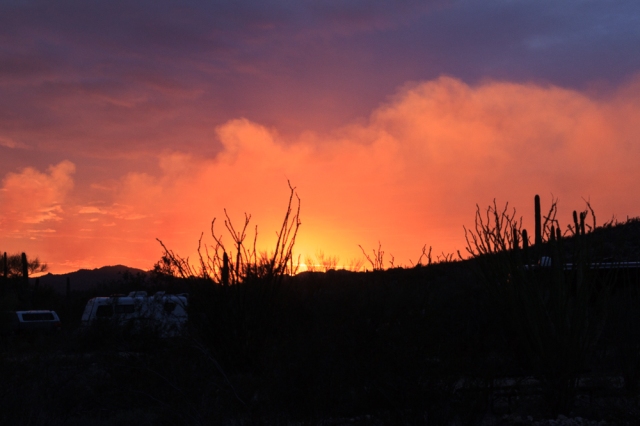 There were plenty more hikes and things to see at Organ Pipe Cactus National Monument that we have to save for another trip. We didn’t bring our generator on this tour and our batteries required a fresh charge, so it was time to move on. Next stop? Benson AZ.

6 thoughts on “Lake Havasu and Beyond”