On Friday, July 29 as we followed the emigrant trail headed east on Interstate 86, we were channeling our inner Willie Nelson and singing “On the Road Again.” So far, the truck troubles we encountered in Sparks and Elko no longer conspired against us.

We stopped at Massacre Rocks State Park and Register Rock to eat our lunch and have a quick look around. Panels outside of the visitor center, tell the story of Massacre Rocks, a narrow passage along the Oregon Trail (now Interstate 86) where emigrants often stopped to camp. The boulders, also known as “Gate of Death,” or “Devil’s Gate,” were so named because emigrants feared attacks by the Native Americans. Documented accounts of massacres and attacks took place east and west of the rocks during the 1850s and 1860s. Register Rock, protected by fencing and a shelter against the elements and persons intent on destruction, contains the names and dates of many emigrants who passed through the area. 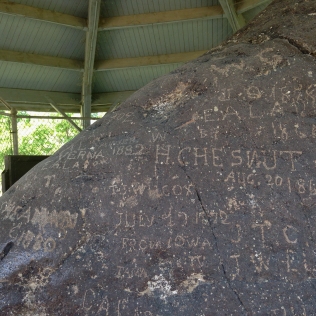 As Jon and I guessed, we found Idaho Falls similar to Twin Falls with an abundance of water and farmland. Once we had settled in at the Snake River RV Park and Campground, we headed downtown where we found a park alongside the Snake River. We marveled at the smooth, calm waters on one side of the river, which flowed over the side onto rocks and boulders creating the falls. It definitely looked man made, but for what purpose?

We continued along the river walk where tall trees provided shade along a path lined with benches. We passed families with strollers, couples holding hands, and a father and son with fishing poles wagging over their shoulders. Then we came across the Idaho Falls Hydroelectric Bulb Turbine Project sign. I had never heard of this kind of power plant, could we possibly take a tour? We would have to wait until Monday to find out.

Needing to replenish our fresh fruit and vegetable bins, we checked out the Saturday Farmers Market. At first, we were disappointed when crafts dominated the booths. But it turned out that the empty lot on one side of the street was for the craft vendors and the produce vendors were set up in the parking lot behind a bank, along with face painting for the kids, kettle corn, bread, jams, and sauces.

Afterward, an offer of “Free Taters for Out-of-Staters!” enticed us to visit the Idaho Potato Museum. They have a short video on growing and cultivation of the potato. A timeline depicts the introduction of the potato from the Andes to Europe by the conquistadors in the 1500s through the early 1800s when Henry Harmon Spalding, a Presbyterian missionary, introduced the potato to the Oregon Territory in 1836. Also included is the development of the Russett Burbank, or Netted Gem. Historians believe Mormon colonists were the first settlers to plant, grow, and harvest the tuber three years before Idaho joined the Union as a state.

A few things I learned about potatoes:

Oh, and our reward for touring the museum? A box of Hungry Jack Cheesy Scalloped Potatoes. Yum! A side dish to pair with barbecued chicken.

Craters of the Moon National Monument and Preserve was our next outing. As we drove up the road toward the park, visions of the Hawaiian Islands lava flows came to mind when we spotted miles and miles of lava rock, cinder cones, and buttes created between 2,000 and 15,000 years ago by the Great Rift volcanic eruptions.

The monument, at an average elevation of 5,900 feet above sea level, includes three lava fields and about 400 square miles of sagebrush steppe grasslands for a total area of 1,117 square miles. The monument receives between 15-20 inches of rain per year that eventually appears in springs and seeps in the walls of the Snake River Canyon. Now we know at least one source of all the water we saw in Twin Falls, Idaho. 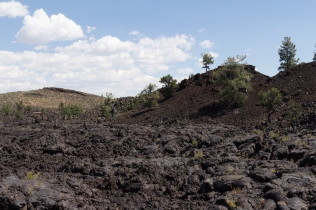 Craters of the Moon was the best example of the National Park system I have seen. With well-maintained paved roads, above par signage with stats on trail mileage, elevation increases/decreases, and even the width of the path, it looked to be a model for other facilities. The park service is currently redoing the campground and as I imagined the landscape draped in moonlight, the word spooky came to mind. 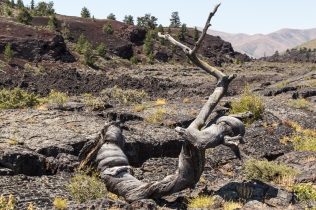 We poked our heads in Dewdrop Cave, but we weren’t prepared like other visitors with their headlamps strapped around their foreheads. A permit is also required to enter Dewdrop and three other caves that spelunkers can explore. I think my favorite part was seeing the out-of-place pine trees, monkeyflower, syringa, and bitterroot growing from the basalt on the older lava flows, the little ground squirrels scurrying around, and pygmy rabbits blending in with the scenery. 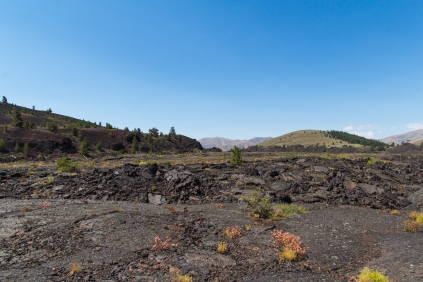 We would like to return to Craters of the Moon someday, spend more time, maybe even venture into a couple of caves, and experience the place at night. Although, snagging a spot at the new campground might be a challenge.

On our way back to base camp we stopped at the yellow structure created by John Grade titled Spur, which was inspired by the lava tubes at Craters of the Moon.

Further up the road in Arco, stands a hill speckled with numbers. Each year, high school seniors paint the year of graduation on the hill.

The day had arrived for our private tour of Idaho Falls Power. We learned of the Teton Dam collapse in 1977 that destroyed an existing electric power plant along the river and that the construction of the Bulb Turbine project occurred between 1978 and 1982. Matt Evans, our tour guide, led us downstairs to a hatch in the floor that allowed us to see a turbine casing. They are similar in size to the ones used at Shasta and Hoover dams except they are placed on their sides, not upright.

Turbine on its Side 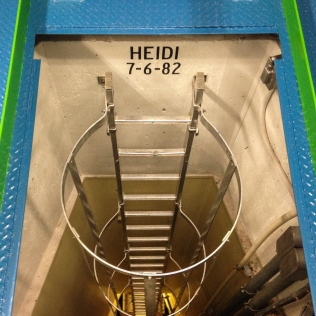 The water flows through the facility at one end (picture with branches in the water) to power the turbines and exits at the other end (picture with swirling water) to continue its journey to Twin Falls and beyond. We had driven by the building a few days earlier and never guessed there was a power plant below the river surface. The distinctive landmark is the orange and white water tower shown in the farmer’s market picture above. 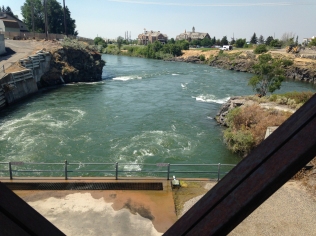 The apparatus we saw along the river walk diverts water for use at the power plant and releases the excess to create the falls. The plant channels 6000 cubic feet per second of water through the turbines to produce up to 8000 kilowatts of energy each. There are two other plant sites in the city and combined they produce approximately 100 million kilowatt-hours of electricity annually.

After the tour, we drove around town and found The Protector, an eagle monument believed to be the largest in the world. Created by Vic Payne and installed in 2006 for McNeil Development, it is the focal point in the center of a roundabout.

With clean clothes, a stocked refrigerator, and reservations at Yellowstone Mountainside KOA, we were ready to hit the road again for our next adventure.