None of the jewelry stores near Custer could replace watch batteries so off to Rapid City we drove. With a new battery and refreshing drinks in hand, we explored the downtown area. John Adams looked thirsty so Jon gave him a sip from his Frappuccino

Bronze statues of 43 US Presidents stand on almost every corner of the downtown city blocks earning Rapid City the honor of the “Most Patriotic Best Small Town in the United States.” We had fun guessing who the statues portrayed before we read the plaques. Visit the City of Presidents visitors center for to see the original statues, information on the presidents, and a map.

The City Park was hopping while we were there. On stage groups of children performed while family, friends, and neighbors beat the heat by playing in the water feature or huddling under umbrellas.

Independent bookstores have a tough time these days keeping the doors open. Diversifying the business model to include jewelry, music, and T-shirts seems to help this store make ends meet.

The popularity of brewpubs has done wonders to revitalize run down buildings in older cities. Firehouse Brewery converted the old Rapid City Fire Department building, complete with a 9/11 tribute mural on the side.

I’ve seen other breweries housed in old firehouses during our travels. Buildings renovated by breweries throughout the country include banks, churches, factories, and old hotels. What would have happened to all those buildings without the popularity of craft beer?

One of the most interesting parts of the city was Art Alley. A one-block alley filled with art painted on the walls of buildings, staircases, and dumpsters. Some of the art expressed a message.

Others contained cartoon characters in contemplation.

As is often the case with any rules, not all artists obtained the required permit from participating businesses or honored the prohibition against painting stairwells and dumpsters.

Looks like the owner or tenant of this building gave up the idea of having a pristine canvas on the wall.

Is this considered art? 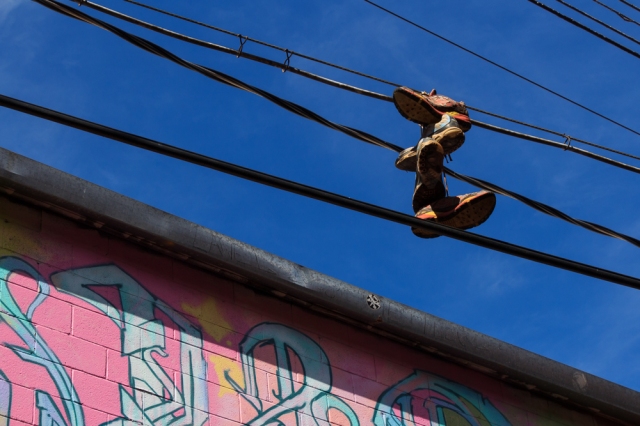 I liked the detail in this mural of a man.

Although we only stayed a couple of hours, we liked the feel of the town. We encountered friendly people, a thriving downtown scene, and other amenities a population of 73,000 might enjoy. I wouldn’t mind going back and spending more time.

Jewel Cave was the last place on our list to visit before leaving the southern end of the Black Hills. Tickets for the 80-minute scenic cave tour are distributed on a first come, first served basis. We arrived around 10 a.m. and the next available tickets were for the 12:40 p.m. tour. Jewel Cave is not as pretty as other caves we have toured. There aren’t as many stalactites or stalagmites. But the sparkling quartz gives Jewel its own unique beauty.

Other tours are available: A 20-minute program, a historic lantern tour, and a wild caving tour, and internship for students. Jewel Cave is the third longest cave in the world, only about 3% of which has been explored. Some people believe it is possible that Jewel Cave and Wind Cave, 20-miles away, are connected.

On Monday, June 26, we drove a short distance to Roubaix Lake Campground in the Black Hills National Forest hoping to snag a campsite for a few nights. 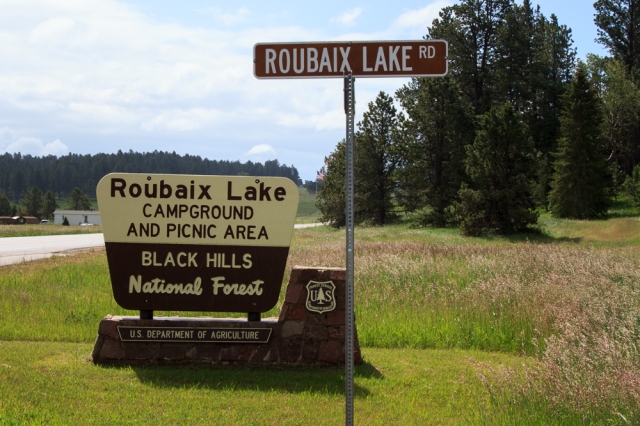 The campground host directed us to the unreserved sites and I think we managed to get the best site in the campground. The large space that overlooked the rest of the campground made it easy to maneuver the fifth wheel in place for a patio view of the forest and no close neighbors. 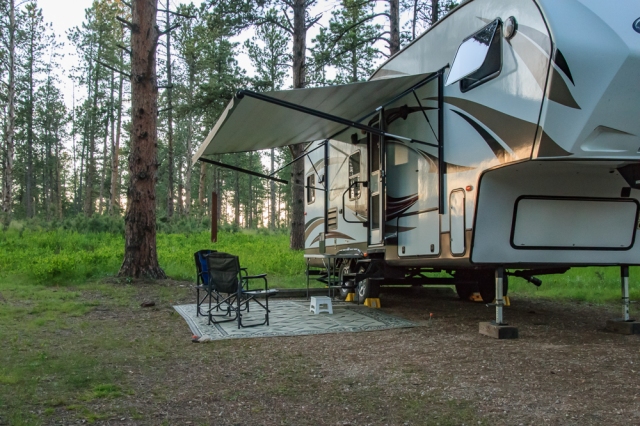 Upon viewing the lake and learning that the Game Fish and Parks Department had recently stocked trout, Jon found a place to purchase a three-day fishing license.

While Jon went fishing for two days, I enjoyed sticking around the trailer. Although cellular service, Wi-Fi, and electricity were non-existent, I kept busy writing with pen and paper and catching up on my reading backlist. Jon was thrilled to have reeled in one of the biggest trout he has ever caught.

One afternoon we took in the sights at Deadwood and Sturgis. Deadwood was a typical western town complete with gift shops, restaurants, bars and grills, and even a cigar bar below street level.

Sturgis did not impress us. Then again, we arrived on a slow day. Motorcycles, Camaros, or Mustangs did not fill the streets. Perhaps it’s not the city itself that is the attraction, but the rallies that occur several weeks out of the year and the people who attend. Or, maybe we went to the wrong part of town. Only one lone photo to prove we had been there.

Fall must be a magical time to drive through Spearfish Canyon. Ponderosa and spruce pines share the Spearfish Creek banks with aspen, birch, and oak trees. The damp rainy weather that accompanied us on our drive coated the leaves and branches with droplets of rain. Layers of limestone in beige or tan, mauve, pink or red hues, sit atop layers of brown sandstone.

I had picked out a couple hikes for us to try along the canyon. Unfortunately, the inclement weather kept us in our truck. That is until we came to Bridal Veil Falls where we had to make a stop long enough to dodge the plops of drops to snap a photo.

After driving through Spearfish Canyon, we drove out to Sundance, Wyoming. This small town is where Harry Longabaugh spent eighteen months in jail for stealing a gun, horse, and saddle from a nearby ranch. Longabaugh continued his criminal activity and later earned the nickname the Sundance Kid. We ate the best burgers and service ever at the Longhorn Saloon and Grill.

Devils Tower National Monument was our next stop. The tower was visible for miles as we approached. Several vehicles stopped at this viewpoint to take pictures.

We were glad we hadn’t towed our trailer to the monument. Parking was limited at the visitor’s center and not suitable for a truck and trailer rig.

The 1.3-mile loop trail around the base of the formation delivers views of the surrounding area, spots to check out the progress of climbers, and a multitude of perspectives of the tower. Sacred to the Northern Plains Indians and other tribes, it is a place requiring reverence.

We made it back to the visitor center with only a few raindrops on our heads, but while I was in the restroom, a hailstorm let loose and bombarded me on my way back to the truck.

What caused the geological formation to rise from the landscape with such significance? Geologists agree on what formed the tower, but not how. Visit the National Park Service online for more information.

We had a great time in the Black Hills, but for now, it was time to move on. Next stop? Little Big Horn Battlefield.