Happy Easter to one and all! How has your holiday traditions changed this year? We had scheduled a family vacation on Kauai from April 3 through April 13. I’m sure you can guess what happened to those plans. Today we are hunkered down in our individual homes and making the best of the situation.

Since I’m not able to share any photos from the Kauai trip that didn’t happen I’ll share the results of a photo walk I took downtown a few days ago.

I started at the Pleasanton Library. This was a Thursday afternoon when middle schoolers would normally be sitting on the grass or on the planters after school and waiting for their parents to pick them up. All was quiet this day.

The City of Pleasanton, California, incorporated on June 18, 1894. Although the town was named after Union Army Major General Alfred Pleasonton, a typo is responsible for the current spelling. The 24.2 square mile city was once a stop along the transcontinental railroad. It is home to the Alameda County Fair since 1912, and the Pleasanton Fairground Racetrack built in 1858 is believed to be the oldest 1-mile horse racing track in the United States. I wrote about the fairgrounds in my post 154th Scottish Highland Gathering and Games 2019

We’ve been missing our year-round farmers market that sets up every Saturday on this block. It would be difficult to practice the 6-foot distance along this street with the vendor’s booths lining the street.

Peet’s coffee would normally be bustling with customers sipping their coffees outside at the umbrella-shaded tables. This store is closed while others remain open. Most of the restaurants, however, are offering pick and delivery orders.

People who have or still do live in the area include: Phoebe Hearst, mother of William Randolph Hearst; John Madden, football coach and sportscaster; Scott Adams, cartoonist, creator of Dilbert; and Ryan Roxie, singer/songwriter and guitarist for Alice Cooper, Casablanca, and Slash’s Snakepit.

It’s difficult to find parking on most afternoons in this bustling downtown area. With the stores closed, drivers have the pick of spots. 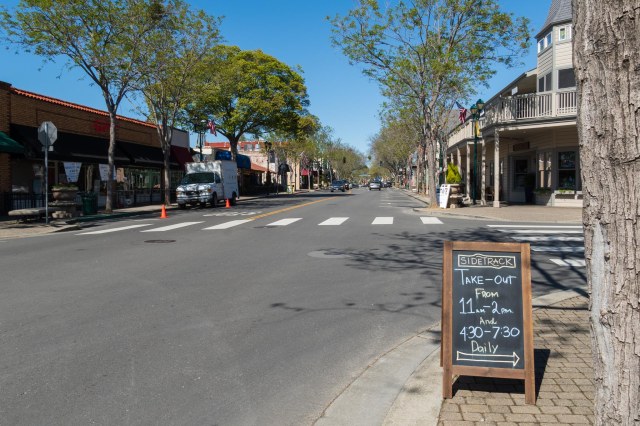 Although some of the buildings on Main Street have been torn down to make room for newer construction, there are still plenty that have historical significance. The Pleasanton Gas Station was built in 1933 in the Mission Revival style. The arch on the building behind the station was the entrance to a garage.

The Spanish Colonial building constructed in 1914 was once home for city hall, a public library, and the police station. The Museum on Main moved in after an extensive historical renovation in 1984. 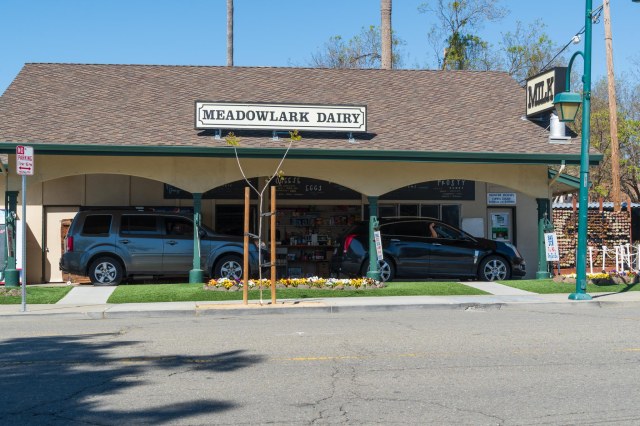 We moved here twenty-five years ago. Although the town has grown a lot since then and traffic is much worse, we have not yet found any other place we would rather live. We’ve found plenty of places we like to visit for extended stays, but not to live year-round.